A recurrent neural network that solves some bitwise problems, like addition and multiplication. Its fun to watch the error converge for each binary digit.

The idea came from analyzing Backpropagation Networks and Hopfield networks, and concluding that the two could be combined to simulate short-term memory as stable states between the input and output formulas. The eigenvectors of the recurrent function. I did some researching and soon found out the tactic was already published as a 'Recurrent Neural Network.' I also later learned that RNN's competed incredibly poorly with the (more modern) Long-Short-Term Memory (LSTM) network models on certain tasks. I have not yet implemented a LSTM, though I'd really like to. In other tasks the RNN still pulls ahead.

Naturally while contemplating RNN's I was also hard at work contemplating the operation of our own minds. I came up with a few conclusions in the process: An incredible majority of the reactions, opinions, observations, and perception in general which we form through the day - assumptions we make and things we assume are - are all in our head. Byproducts of formulated memories we have sticking around in the back of our minds. You guess your friend wore that shirt for this reason when they in fact did so for something completely different. Not to dis the concept of the soul - a very true object in reality (though not the physical, as I was told Time magazine spent extensive work discovering and pointing out) - for coincidences observed in my own life, as well as others, has convinced me that certain things operate on a deeper level than the physical.

Another concept this made me conclude (and stand behind for a very short time) was that memories were stored not as single neurons or entities within our mind, but rather as eigenstates of electrical impulses over the entire system of our brain. A popular and common held believe, so I've heard, amongst the nihilist scientific community. One that - gratefully - was debunked by a find I remember Discover magazine reporting on only within this year: that they now learned our brains' form individual neurons for each objective concept which we perceive. The fact that the LSTM model - which maintains recurrent signals per-neuron rather than as eigenstates of the entire system - outperforms the RNN model at the task of maintaining stable memory states does prove this in the simulation realm. What does this mean? That there's more to objective thought and objective truth than we gave Plato credit for. How does our mind know what to delegate neurons towards?

For kicks I made the code compatible with DJGPP and MSVC as well. I did the whole preprocessor dance between the two compilers.

Included is some classes for rank-1, 2, and 3 tensors. The math that makes use of them was fun working out, and took me a few days' worth of free time.

Hey kids, you can develop your own Recurrent Neural Network at home! Here's how it works: First, start with your linear system. Wrap it in a transfer function (hyperbolic tangent has been good to me). Calculate an error by the sum of the difference between your desired and actual output. Then use the derivative of the error with respect to each of the weights to find which way changing each weight will result in more error. Adjust the weights in the other direction and they will converge on your desired signals.

2007.08.26: I dug this up again out of nowhere and began tinkering with it again. Honestly someone at work had to implement a scripting language capable of parallel operations. That got me to thinking about various representations of programming languages, and back to how the mind represents state transitions. So I pulled this out again. I managed to get it working with pattern prediction problems with no input signals: the net eventually forms the correct state transitions to produce the correct outputs. I got a two state working right off the bat - which really surprised me. Three state only seemed to work under special conditions until I realized I should probably vary the gradient descent step size. Then everything fell together. I tested up to five states before the process began taking up to a million iterations for good convergence. Now it is on my todo-list to implement a better integration method. Any tips? Harmonic series? Adams-Bashforth? Romberg? I'll have to look into this.

Next I started working with recognizing simple grammars. This worked easy for a two-state grammar with a two-element input set. I switched it up to three states and didn't get complete convergence (only to something like 1e-5 or so) and an incorrect state diagram. Oh well.

In conjunction with this I began building a state space diagram plotter in OpenGL (using my Lua GL shell program for kicks - I'll have to post that sometime). Some of the 3D screenshots are out of that. Once I really learn what I'm doing I'll start sending off the transitions to graphviz or something. We'll see. 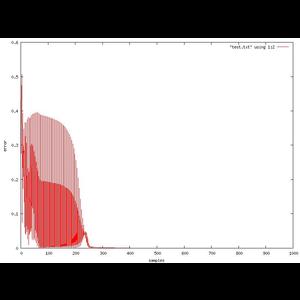 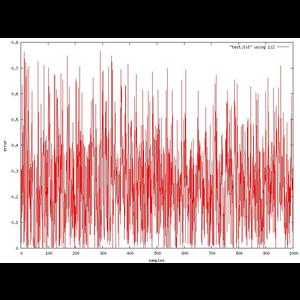 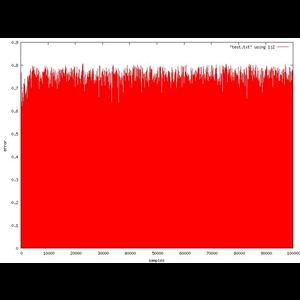 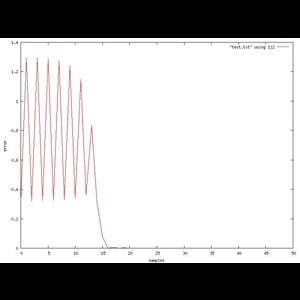 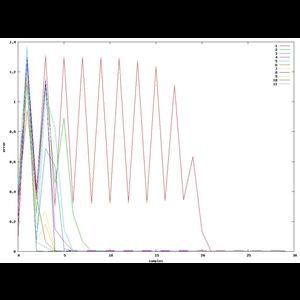 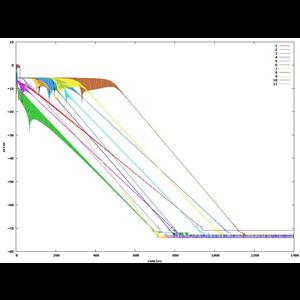 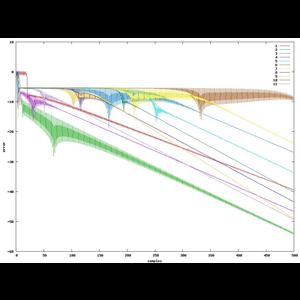 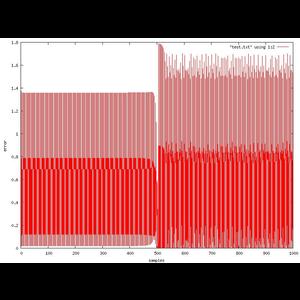 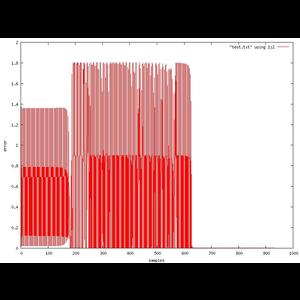 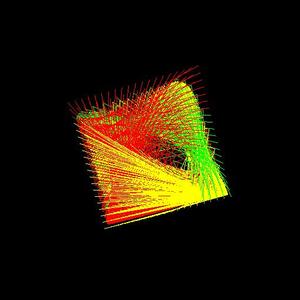 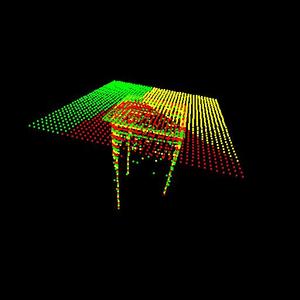 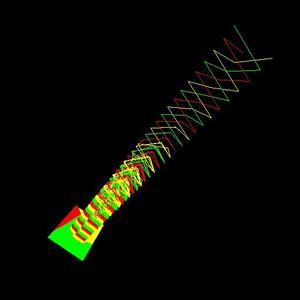 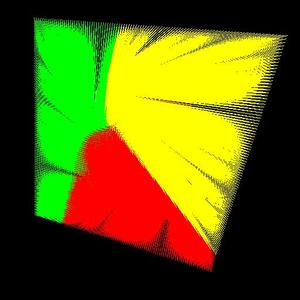 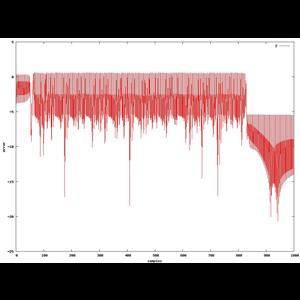 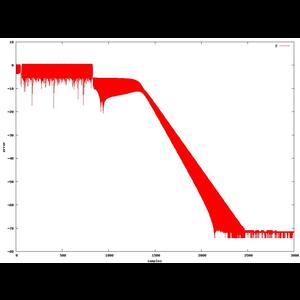 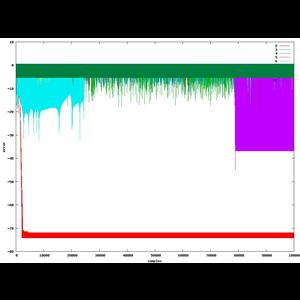 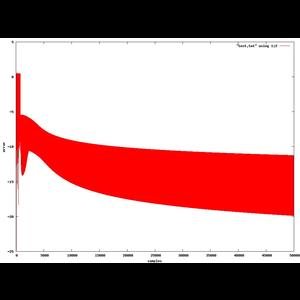 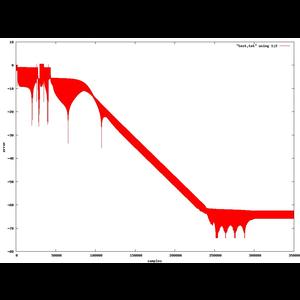 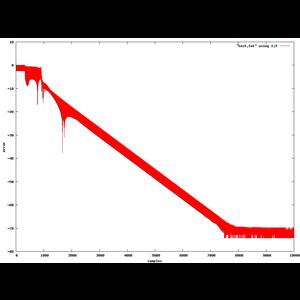 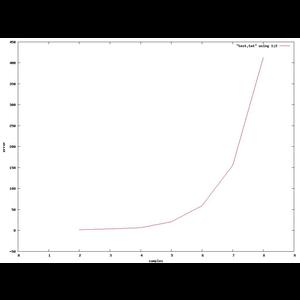 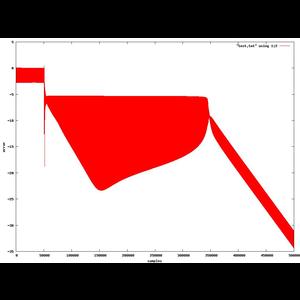 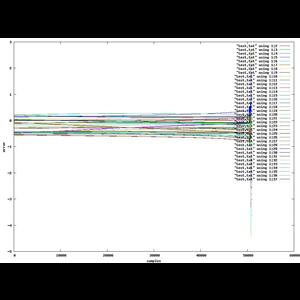 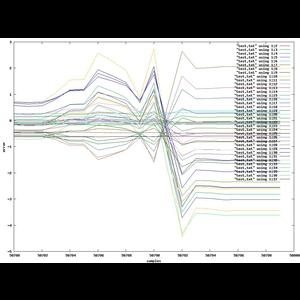 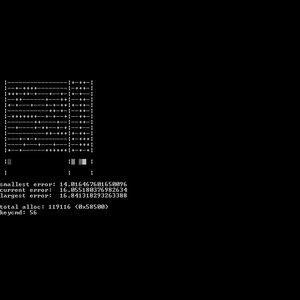