Once upon a time, back in 2002, I had a hybrid terrain/BSP engine. Such hybrid engines were the up and coming thing back then. It was the first iteration expression of my friend Jon and I's plan to make a videogame. He would do the art. I would do the programming. In the end it became little to show for, yet a giant lesson.

In the end the Landscape engine (the project was actually entitled, "Landscape") was capable of rendering multiple terrain geometry. Tiles could have arbitrary holes in them (the collision code coped with this well), or arbitrary alpha values, and the triangle divider could be flipped as the designer so desired. Geometry layers themselves could have multiple texture layers, all with their own texgen properties. LOD was experimentally added later, as well as some simple vegetation. Mod extensibility could be provided via separate DLL (like all the cool games were doing at the time. Scripted cutscenes could be specified with my own in-the-house project. Character was done with an open-ended system capable of sprites or keyframed models. The script was never advanced to Lua and and The editor never made it past Win32. That's the last condition I left it in.

Some day I'll post that on this site too. 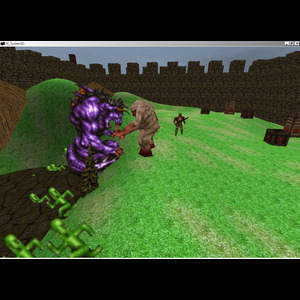